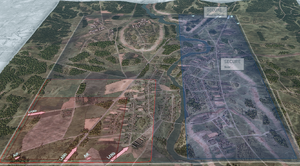 Although the garrison at Orscha was still stubbornly holding on, the Soviet armored breakthrough forces had bypassed it already and were racing through the undefended German rear. The only regular Wehrmacht unit available in the area was the anti-partisan French collaborationist LVF (Grenadier-Regiment 638). In a desperate effort to stem the tide, and only supported by a handful of Tigers and Stukas, their mission was to slow down the Soviet onslaught long enough to allow for much-needed reinforcements to be brought up to the front.