Pointe du Hoc is one of the battlefields found in Steel Division.

The highest point between Utah and Omaha beaches, the promontory called Pointe du Hoc was heavily fortified by Nazi forces to fire upon the landing forces on both beaches. On June 6, 1944, the cliffs were assaulted by US Army Rangers, scaling the rocky face and routing the 914th Grenadier regiment of the 352. Infanterie Division. 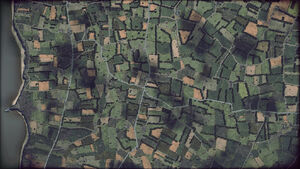