Omaha is one of the battlefields found in Steel Division.

Omaha Beach was one of five landing sectors during Operation Overlord. The landings were executed by U.S. forces, primarily the 29th and 1st Infantry Divisions, rookies and veterans. Although planned in meticulous detail, the June 6, 1944, proved that no plan survives confrontation with the enemy. The 352. Infanterie Division, entrenched and positioned in strongpoints along the 53 km front proved to be capable opponents and their defenses stronger than military planners anticipated. Heavy casualties were sustained during landing, but combat engineers eventually managed to clear the way towards the cliffs, with the survivors of the first wave of landings achieving two isolated penetrations that allowed Allied forces to clear the outer layer of defenses and move inland, compensating for the failure to secure exits from the beach. 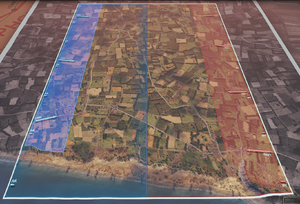