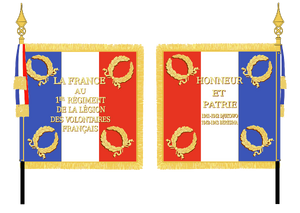 Légion des volontaires français contre le bolchévisme (Legion of French Volunteers Against Bolshevism, LVF for short), was a militia formed in Vichy France in July 1941. Incorporating a broad variety of Nazi collaborationist parties, the unit was not formally tied to the Vichy regime - Petain actually disapproved of Frenchmen fighting in German uniforms under the swastika.

Composed principally of French right-wing volunteers, POWs trying to get out of forced labor in the Reich, and even Russian emigres, the LVF volunteered for service on the Eastern Front. Initially counting two battalions (2 271 men and 181 officers each, with 35 German officers), the LVF fought at Moscow in November 1941, losing a majority of its number. Over the next three years, fueled by additional volunteers from France, it took part in suppressing partisans in Ukraine and Belarus.

In 1944, the LVF found itself fighting Soviet Units directly as a delaying action, as Operation Bagration rolled across Eastern Europe. By Fall, the LVF was disbanded and survivors reorganized into the Waffen-Grenadier-Brigade der SS Charlemagne, bolstered by a recruiting drive that provided three thousand new recruits, initially organized into the 8th Volunteer Sturmbrigade France.

In February 1945, the Brigade was officially upgraded to the division, becoming the 33. Waffen-Grenadier-Division der SS Charlemagne (französische Nr. 1), at 7 340 men. The heirs of LVF were among the most loyal troops at the Nazis' disposal: After its destruction in Pomerania, about 350 survivors of the division went on to fight in the Battle of Berlin and were among the last to surrender, with only about 30 surviving the battle.