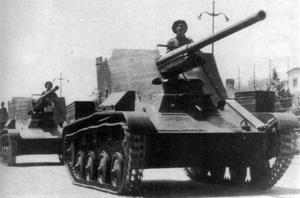 Iasi is the seventh campaign in the Army General mode in Steel Division II. It has a level 3 difficulty/complexity.

On August 20th, 1944, the Soviets take the Axis troops in Romania completely by surprise with a devastating strategic offensive. In only a matter of hours, the front is broken in multiple places.

Left quiet all summer, the most capable Wehrmacht forces of Army Group South Ukraine have been urgently rushed north to reinforce the crumbling defensive lines in Poland and Belorussia. Therefore, when the Red Army strikes in late August, there are almost no reserves left to prevent a breakthrough.

Despite the desperate resistance of several German and Romanian formations, and a spirited counter-attack by “Greater Romania” armored division, nothing could stop the Soviet juggernaut from rolling into Romania.

Within two days, both flanks of the German 6th Army had collapsed, with Axis units pushed back in disarray. Having been surrounded once again, the second destruction of the 6th Army was swift and complete. August 20th, 1944, became “Black Sunday” as the Third Reich suffered some 250.000 casualties in total on this day.

The successful Soviet offensive also resulted in a quickly sprung coup d'etat by King Michael I, with Romania switching sides, joining the Allies and taking up arms against their former Axis comrades within days. Too late to intervene, Hitler had lost the valuable Ploiesti oil fields, and the critical military support of a large ally.

The staunch resistance of the German and Romanian troops on the Iasi & Targu Frumos line gave the 6. Armee enough time to counterattack. Spearheaded by the 10. Panzergrenadier, the counter-offensive hit the 2nd Ukrainian Front off-balance, in the flank, sending it reeling back to its starting position.

Breaking through the Axis front on both flanks of the 6. Armee in under two days, Soviet mobile troops quickly closed the trap behind the doomed German formation. A week later, the Romanian army had disintegrated under the double effect of the Soviet offensive and King Michael's coup in Bucarest, which brought Romania to the Allied side. This left the 6. Armee completely isolated far behind enemy lines, with no chance of escape.

Through combat, mass surrender or defection, the Third Reich lost about 150 000 German troops as well as the whole Romanian army.