Game Mechanics or The Math behind Steel Division.

In order to kill the enemy, you need to first see the enemy. Recon is crucial in these situations, especially if you see the enemy from far away and gain the first strike. Below are a couple of screenshots comparing the different situations. 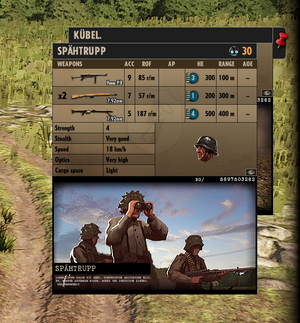 The unit information panel, showing a group of German Spahtruppen.

Steel Divisions accuracy system is inspired by its tabletop gaming origins and is based on rolling two 6-sided dice. (In short: 2d6)

In order to determine if a shot hits its intended target you need to follow these simple steps:

Or in short pseudo-code:

Ranging from -6 (shaken morale, firing at max weapon range) to +8 (close range, 3 stars of veterancy, third shot) or anywhere in between they can have a pretty big influence on the success of your shot.

Crit. system as it is after Santa Claws patch December 2017:

We think this is the right data:

When you penetrate a tank you deal a crit roll + 100% of the damage of the AP shell.

Every hit rolls a 20 side dice. with different possible out comes for penetration or bounce and the side hit (see the outcomes below).

Damage for each gun[edit | edit source]

after seeing these numbers and combining it with what I've experienced

Bounces probably negate all the damage

The Morale/Suppression system is defined in the file ../GameData/Gameplay/Gfx/Generated/DamageLevels.ndf. It defines six levels (french palier), but it differentiates between unit types, which make it rather complex!

Steel Division differentiates 4 levels of experience: normal, veteran, elite and super elite. The effects are defined in the files:

The way Steel Division is designed and balanced does not force the player do bother with micromanagement. But in certain situations, doing so proves to be highly advantageous.