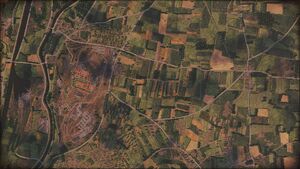 Colombelles is one of the battlefields found in Steel Division.

The Colombelles steelworks were located on the outskirts of Caen and were the site of brutal fighting between British and German forces during Operation Goodwood. The factory area was used as an observation post by recon elements of Nazi forces (thanks to its tall chimneys). Numerous attempts to seize the area failed, until General Montgomery finally issued a directive to try and force the Germans to surrender by wearing their forces down through attrition. The steelworks did not fall until July 18, following a massive aerial and artillery bombardment that reduced much of the area to rubble.