Caumont's Gap is a scenario in Back to Hell, set near Caumont-L'Evente on June 12th, 1944.

Caumont's Gap covers lost opportunity by US 1st Infantry Division to break the German front even before the Normandy campaign really started.

After landing at « Bloody » Omaha with dreadful losses, the elite « Big Red One » moves carefully inland.

Near Caumont-l'Eventé, unbeknownst to them, they advanced right into a major gap in the German defenses, virtually undefended: only two companies from 2. Panzerdivision's recon battalion are there, screening the complete lack of in-depth defense behind them …

Although they lost Caumont-l'Eventé quickly to the Big Red One, 2. Panzer's scouts managed to hide their weakness. Screening the gap behind them, they held La Londe long enough for reinforcements to arrive, preventing the Americans from tearing the German front apart before the Normandy campaign even really started.

La Londe would therefore remain in German hands for almost two more months, only being liberated by the British army during Operation Bluecoat. 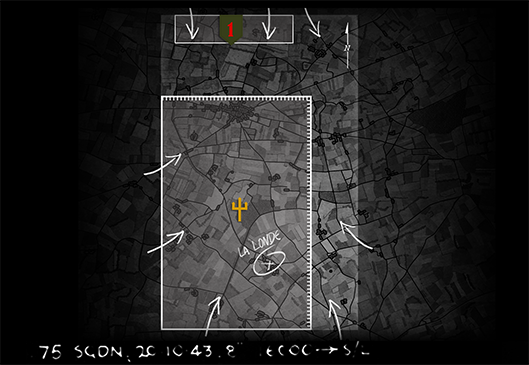